It was recently revealed that gamers who already owned The Last of Us on PlayStation 3 would not be getting any kind of discount when upgrading to the PlayStation 4 remaster, but there is still a way to get a decent discount an other way.

For those of you who go to GameSpot, if you trade in your PS3 version of the game you will get 50 percent off the PlayStation 4 version. That means you will be able to get The Last of Us: Remastered for just $25. This is certainly a great deal, but if you are going to utilize it you need to act fast as the deal only runs until August 2nd.

The Last of Us: Remastered launches on July 29th.

On the PlayStation EU Blog, manager Fred Dutton said the following when asked about an upgrade discount:

“Alas, there is no upgrade discount.”

Well, that settles that! It’s worth noting that this is only for the European side of things, but that will likely hold water for North America, as well.

There had been some discussion about giving a discount for those who already purchased the PlayStation 3 version of the game, as Sony publicly said that they were looking into the possibility. However, I think the compromise here is that, instead of getting a discount, they instead dropped the price from $60 to $50.

The Last Of Us is getting the remaster treatment in the form of (you guessed it) The Last Of Us: Remastered, which will give the game updated PS4 visuals and come packed with the Left Behind DLC and Game of the Year extras.

However, the game is being sold for the full $60, so if you’re planning on grabbing the game at launch then you might want to consider pre-ordering it through Amazon. If you pre-order it now you will get the game for $49.99, which Amazon will honor even if the price does get raised at some point before release.

A release date was finally revealed for Naughty Dog’s critically acclaimed action-adventure game The Last of Us Remastered. The game will be coming to PlayStation 4 on July 29th, which was revealed at Sony’s E3 press conference.

The game is set to have 1080p visuals and all content and DLC that was in the original game. Check out the trailer for the game below. [youtuber youtube=’http://www.youtube.com/watch?v=DmP2QLKJFr0′%5D

The existence of The Last Of Us: Remastered has been one shrouded in mystery and betrayal (kind of), as no one really knows when they expect it to be released. Until now!

According to UK games retailer GAME The Last of Us: Remastered could be coming out on June 13th, which (interestingly) would be right at the tail-end of E3. Has a big E3 reveal just been ruined?

The following image was given to IGN which seemingly this whole crazy secret and definitely illegal scenario!

Considering The Last Of Us originally came out on June 14th and June 13th marks the end of E3, the 13th would be just about the perfect time to release the game. It’s the one year anniversary, and what better way to celebrate then playing the game on a new-gen system!?

When it was announced that Naughty Dog would be bringing The Last Of Us to PlayStation 4 via The Last Of Us: Remastered, many were skeptical about just how much effort they would be putting into this remaster. Well, judging from this interview with Edge, they went through a hell of a lot of trouble to make this thing work.

“We expected it to be hell, and it was hell,” he said. “Just getting an image onscreen, even an inferior one with the shadows broken, lighting broken and with it crashing every 30 seconds … that took a long time. These engineers are some of the best in the industry and they optimized the game so much for the PS3’s SPUs specifically. It was optimized on a binary level, but after shifting those things over, you have to go back to the high level, make sure the systems are intact, and optimize it again.

Basically, every single thing about this game has been re-done. Which makes me very optimistic about the finished product we will be dealing with when it releases on PlayStation 4 later this year.

The Last of Us: Remastered, which is a remake of last year’s critically-acclaimed survival horror game, might finally have an exact release date.

Previously, all we knew about The Last of Us: Remastered was that it was coming this Summer, but several retailers such as GameFly, Target and Best Buy are now listing the game’s release date as June 20th.

Of course, these could just be placeholders and Sony has yet to confirm an official release date, but it is worth noting that 3 major retailers are all listing the same release date.

If this ends up being true, then this is just about as best as a best-case scenario can turn out. The release window was originally listed as Summer, but this is actually the day *before* Summer! Can’t complain about this rumor!

So we finally know that The Last Of Us will indeed be getting the remaster treatment for PlayStation 4, but what we didn’t know was just when this project was underway.

Now, in an interview with PlayStation Access, Naughty Dog co-president Evan Wells has revealed that The Last Of Us: Remastered has been in development since the original version came out.

Here’s what Mr. Wells has to say to PlayStation Access:

“We had a lot of people on the forums saying ‘can I play this on PlayStation 4?’ We’ve been actually anticipating that, and started working on it pretty much as soon as we finished the PlayStation 3 [version of the game]. We weren’t sure whether it was going to go anywhere, but when we saw the fans clamoring for it we doubled-down, and put more effort behind it.”

He also talked about just how much improvement will be noticeable in this enhanced version:

This is really good news to hear. I was beginning to doubt just how much they would be able to improve this game if the project just went underway recently, but the fact that it has been going on for many months has me much more confident. It sounds like this thing wont be the rush job people were initially fearing, but instead an all-knew and potentially even more incredible way to enjoy this game. My judgment is Condone.

Gamers have been tormented for weeks now about a possible PS4 port of last year’s The Last Of Us, and now (after much teasing) developer Naughty Dog has decided to stop your bleeding and just confirm the damn thing already.

How did they confirm it? Well, by way of this little announce trailer that you can watch right below.

OK, so I understand that this trailer basically gives us *nothing* when it comes to information we don’t already know. We know how many flippin’ game of the year awards it won, we know that Joel is emo and we know that this thing will look all pretty when it hits this summer.

The one thing it *does* give us is a remastered version of the emotional giraffe scene at the end of the game. It looked completely stunning, and was quite enough to make me soil myself.

I need a new pair of undies, but before that I’ll let you know that my judgment is Condone.

After a leak displaying product information on The Last Of Us: Remastered, developer Naughty Dog went ahead and pulled the curtains on the remastered version of their winner of numerous game of the year awards.

The Last Of Us: Remastered will contain the main game, DLC and director’s commentary for all in-game cinematics. A price point hasn’t been revealed yet, but many retailers are listing the game at $60.

As far as actual specs for this enhanced version, we know that the game will run at 1080p and have higher resolution character models, improved shadows + lighting and upgraded textures.

Check out the box art below. 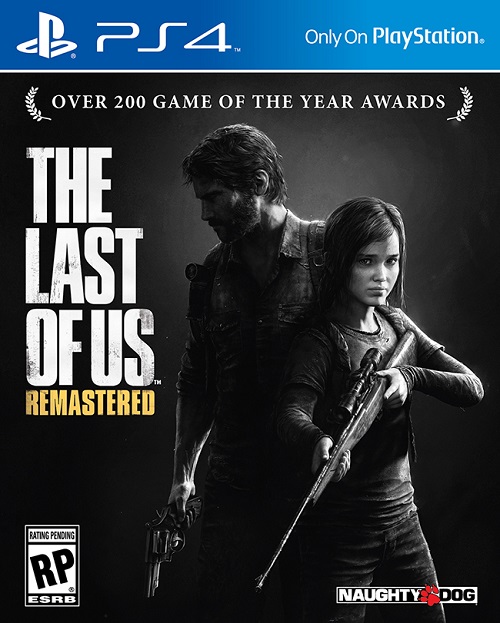 If you preorder the physical version of the game you will get the following bonuses:

If you preorder the digital version from the PlayStation Store you get the following bonuses:

Though this certainly isn’t a package that will be offering anything mind-blowingly unique compared to last years PS3 version, you better believe that just about everyone will happily fork over money to play this for the updated PS4 graphics alone. I think the PS4’s controller is much better suited to this game’s style of play compared to the PS3 controller, so this good very well end up being the definitive version of the game. My judgment is Condone.

Eurogamer has just revealed a screen capture that they apparently took that reveals the long-rumored PlayStation 4 version of The Last Of Us.

According to the image, it will be a day-one digital release, which suggests a physical version will also be coming.

Although no release date information has been spotted, it has been previously suspected that the game will release this June.

Check out the image below.

This is all starting to look pretty legit now. The fact that we have an actual screen capture of the image on PSN along with a price and platform information makes me think a reveal could be coming very soon. Or they could just be screwing with our heads, and in that case I will have to call in Jack Bauer to go and take them all out. He’s on speed-dial, Sony, he’s on speed-dial. Judging the legitimacy of this pic, my judgment is Condone.