The dungeon crawl genre of RPGs is one that you simply don’t come across that much anymore, which can probably be chalked up to the fact that there really hasn’t been any true advancement in terms of what the genre fundamentally is and the fact that the average gamer today has the attention span of a gnat. It’s rare when you come across a game that has you go through several floors of one area and utilizing trial-and-error to find your way to the end and hopefully find your target, which makes Demon Gaze such a welcome breath of fresh air for me. In a day and age dominated by quick action, quick action and more quick action, Demon Gaze makes you tirelessly rumble through maze-like dungeons that will in no way, shape or form hold your hand.

The story of Demon Gaze puts in you the shoes of a man named Oz, who wakes up in a dungeon with no memory of his past and now mysteriously has the power of a magic eye that lets him seal demons. You fight your way out of this unknown dungeon and are found by a woman who brings you to a place called the Dragon Princess Inn. The Inn is filled with a varied and eccentric cast of characters that are strangely interested in you, and then it isn’t long before you find yourself on a quest to trek through other dungeons and seal away their demon inhabitants.

From that point on you live at the Dragon Princess Inn, but living there is not free and every time you return to it you have to pay rent for your room. If you fail to pay the rent immediately then you will find yourself in hot water with the manager until you cough up the money. This makes you carefully consider your return trips to the home base, as the game discourages you from just wandering in and out whenever you feel like it.

You start the game off with Oz being the only character in your party, but as you gain enough money you can rent more rooms which allows you more party members in your team. When you pay the money for the new room, the manager will give you the option to either be introduced to a new character for your party that has a pre-determined name, race, class and stats, or you can choose the option to create your own character from scratch. I highly recommend using the latter option, because you will want to make sure that you have a well-balanced and varied party that all bring an important role to the combat.

Demon Gaze offers you a fairly simple pool of races and classes for you to choose from that all have their pros and cons in terms of actual combat. Oz is a Human, which means that all his stats (which are strength, intelligence, mysticism, vitality, agility and luck) are balanced and you have the option to focus on whatever stats you want to improve. However, you also have the option of choosing Elves that are good with magic, Dwarves that are good with physical combat, Migmies that are competent healers and Neys that are very agile. From this point you then funnel into the class options that will then give you stat boosts with certain weapons or armor. These classes are Fighter, Paladin, Samurai, Ranger, Assassin, Wizard and Healer.

A definite strength and highlight of the Demon Gaze experience is the cast of characters that you meet and come to know that reside in Dragon Princess Inn. These include the mysterious manager Fran, your sort-of demon-slayer mentor Lorna, the flamboyant and cowardly item shop owner Lezerem, the brave and kind weapon shop owner Cassel and many more. Throughout the course of the game you will become very attached to these characters, and there is a lot of attention that is put towards actual character development that will leave you with different opinions of the characters as the game progresses. Demon Gaze has a very whimsical visual aesthetic and comedic and silly dialogue that gives everything a light-hearted feel, but the game takes some truly dark turns that shock even more due to those sillier moments. 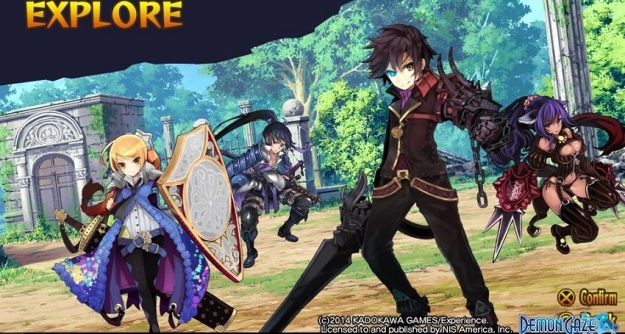 All of this and we haven’t even talked about the beef of the game: the gameplay. Once you dispatch from Dragon Princess Inn you will be spending the majority of your time in dungeons. You progress through these dungeons on a grid-based system, meaning that each time you move you are moving one square up, down, left of right. As you move along the grid you will come across icons that will signify that an item, enemy or note (you can leave notes to offer tips to other players online) is on the particular square, and when you step on the square you will discover what it is. Even though some enemies and bosses are often displayed on the grid, you will also come across the sometimes-too-frequent random encounters.

Now, in the battle system we are in a traditional turn-based combat scenario. You go through all of your characters and select the actions you will be taking, and when the turn begins the actions will play out depending on the stats of your characters and your enemies. What’s atypical about how Demon Gaze‘s combat is displayed is that it looks exactly like the character interactions look: like an anime picture. You have a picture of your enemies and a small picture of your characters on the side of the screen, and that is all you see of the actual combat. You will see things like weapon swipes or magic sweep across your characters’ or the enemies’ picture, and then you will hear an accompany yelp or grunt. I actually quite liked this aesthetic, because it made the transition between the narrative and the combat seamless.

The amount of enemies that you will be fighting at once varies greatly, as you will regularly come across battles that contain anywhere from one enemy to around 15 and everywhere in-between. These enemies can then continuously change their position on the combat line (front, middle or back) which effects their attack options and ability to be hit. Add to this the fact that enemies will also call in for back up often and you have some truly hectic and fun combat situations throughout each dungeon.

Another twist to the combat in this game is that you cannot be revived during battle. You can heal to your heart’s content, but when one of your characters’ health depletes completely they are dead until you exit the dungeon and have them revived by the mortician Prometh at the Dragon Princess Inn. It costs a certain amount of money to revive your characters that is relative to their level, so as the game goes on you will find that it gets more and more expensive to bring your deceased allies back to the world of the living. This makes it particularly scary when you find yourself deep within a dungeon and you are in a situation where one or more of your characters’ death is imminent, which then leaves you with the choice of either running out of the dungeon with your tail between your legs or soldiering on with a reduced party. 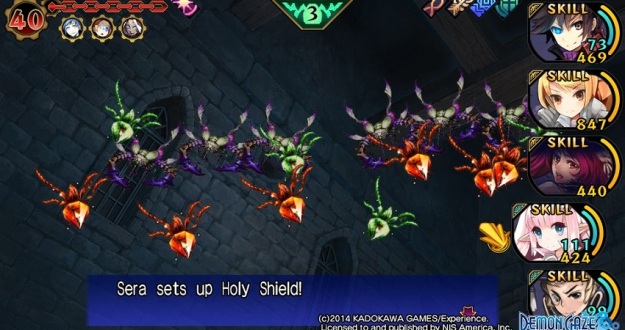 What truly gives this combat a unique twist is the use of Demons. Your quest has you sealing away the demons that you find often at the end of dungeons, but you also have the ability to call and utilize them in combat with items called Demon Keys. Demons have their own health system and a gauge that tells you how many turns they will stay with you in combat. If the demon gauge runs out before you put away the demon it will then go berserk and attack both the enemies and your party. When they are summoned they will act on their own, either attacking enemies or casting healing or stat boosting spells on your allies. They add a sense of spontaneity to an other-wise rigorously controlled combat system that works as a very nice compliment to it. Demons can also come out for a quick turn and strike on their own without being called, which is always good when you need quick pick-up.

The big challenge is when you come across the Demon at the end of the dungeon. These demons have very high amounts of HP and attack power, and often have some form or regular enemy defense with them. Some Demons will have defense items that will have to be destroyed before you can even touch them, and these defense items can be re-summoned as much as they like. These are situations where you want to make sure that you have saved up your Demon Key so it has a full gauge, because you are going to need to apply every resource you have to make sure that you have a solid shot of coming out the other end in one piece.

The spaces that demons are contained in are called Demon Circles. Other than just battling demons that are contained within them, they also allow you to use gems on them that will net you special items with the completion of the battle. These gems fall under 3 categories: Weapon, Armor and Special. This means that if you place a weapon gem on a Demon Circle you will win some type of weapon, an armor gem will net you some kind of armor and so on. You can progress and improve your weapons and armor solely through utilizing these Demon Circles rather than paying the exorbitant prices at the shops, which is a nice change from the usual pace. You can come across some really great items that you wont come across at the shops at all, so it’s even encouraged by the game’s own mechanics to acquire the majority of your weapons and armor this way. 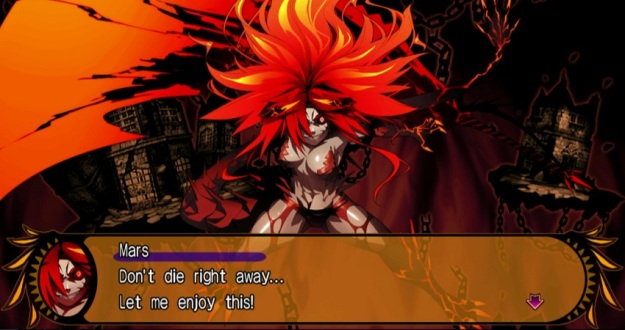 Across the board, Demon Gaze is a mechanically sound dungeon crawler experience that also hoists a great narrative that mixes whimsy with despair really well. There isn’t anything in the game that marks a new era of RPGs or anything like that, but there are enough twists here to make it feel consistently unique and engaging. Like old-school RPGs of the past, it can regularly be very difficult and sometimes unforgiving with its tasks and challenges that it throws at you, but the sense of accomplishment that comes with the eventual success at the finish line is all the more great. Demon Gaze is a welcome return to a classic era of challenging RPGs that contains the sleek polish found in modern RPGs, and should be checked out by anyone with any sort interest in the RPG genre.