It’s no secret that when famous movie or TV brands get the video game adaptation treatment they usually suck. What they ultimately boil down to is a quick cash-in that companies throw out to the market knowing that the fans of the show will eat it up, regardless of its quality or lack thereof.

So, it’s all the more surprising to learn that a video game based off of the long-running TV show South Park exists, and that the creators of the show were heavily involved with the development of the game to ensure that it retained the quality of the show. After some delays and some head scratching, here it is.

South Park: The Stick of Truth tells the story of a new kid in town (called New Kid) that the player controls throughout the course of the game. You get to choose what the kid looks like and talk to your busy and impatient parents briefly, but then you are immediately thrust into the world of South Park in the hopes of making some friends.

Of course, immediately, you make friends with much of the famous South Park gang like Cartman, Butters and Kenny and later on Kyle and Stan. You learn that there is a “war” going on between the humans (led by Wizard King Cartman) and the elves (led by Elf King Kyle) to secure the possession of a twig called The Stick of Truth. Cartman claims that if you possess this stick you control the universe, so, naturally, it is the most important thing in the world to Cartman. Cartman then enlists you in his army (and gives you the title of Douchebag) to help him at times protect and at other times reclaim The Stick of Truth.

Melding wonderfully with both the South Park world and this fantasy epic aesthetic is the game’s RPG gameplay. Just like in many RPGs like the classic Final Fantasy games you fight your foes in turn-based combat. What’s nice about this game’s take on the combat is that it’s simplified and often-times hilarious. You only have 2 people in combat at a time, consisting of Douchebag and one of the major friend characters in the game. You have the options to use both melee and ranged weapons and even use healing items without sacrificing a turn to do so. There are also special abilities that use PP that require you time a button command perfectly to deal the maximum amount of damage.

Most RPGs have some sort of magic system, and South Park’s take on that system is both respectful and hilarious. Technically, you have a Mana system that allows you to cast magic attacks on your foes, but this magic is actually your ability to control and launch your farts at enemies. Farting is a very important element to combat, as it can be used to enhance physical and ranged attacks for more damage and to gross out your enemies so they take damage on the next few turns. 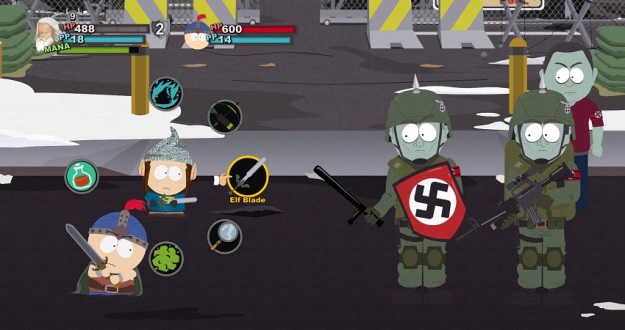 The enemies in the game are very eclectic, to say the least. Throughout the course of the game you will come across regular kid bullies, angry adults, Nazi zombies, fetuses, aliens and the SWAT team. They all bring a unique aspect to the gameplay, as some will have more defense that will need to be removed before real damage can be dealt, and others that can only be damaged by certain means. Depending on the enemy, they will also shout at you and tell you to hurry up because you’re taking too long. My personal favorites were the Nazi zombies that shout German at you in what sounds like a very old recording of actual shouting Nazis. The shear anger they convey when you deal some damage on them never ceased to make me laugh.

As in any RPG worth its salts, you gain experience points at the end of battles that allow you to level up and learn new abilities. These will allow you to deal more damage to your foes or even cast some status-effecting ailments like bleeding and paralysis. You will also obtain new armor and weapons that range from classically medieval to gross-out hilarious that will bring both a visually and mechanically unique aspect to combat.

South Park takes these classic RPG elements and gives them a more simplistic and hands-on approach. Much of the abilities that you use in battle can also be used while you are roaming the world of South Park. You can use your melee weapon to knock down barriers, ranged weapons to trigger items to fall on unsuspecting enemies and you can use a variety of different farting techniques to cause things to explode. What this does is bridge the gap between free-roam gameplay and combat gameplay, making the transition between the two seamless.

Even though the game is has great gameplay, the true star of the game is the comedy and that is exactly as it should be. Creators Trey Parker and Matt Stone were heavily involved with this game and it shows point-blank. I wouldn’t consider myself an avid fan of the show, but I have seen enough to know how a game based off of it should work and The Stick of Truth nails it. It feels like you are playing a full season of the show, only this time you are directly controlling all of the hilarity. This game throws in many of the classic episode events like ManBearPig and Alien probing while bringing in fresh new gags and insanity, and it is all offensively hilarious just like the show. South Park: The Stick of Truth is truly a worthy adaptation of the TV show that can stand proudly next to even the series’ finest seasons.

124 thoughts on “South Park: The Stick Of Truth (PlayStation 3) Review – A Game Worthy Of The Source Material”