When a gamer deals with a first-person view, it is typically in the form of first-person shooters or open-world RPGs like The Elder Scrolls series. That’s what makes the Thief series so interesting, because it’s a stealth game through-and-through, yet it keeps you almost exclusively in the first-person view. This is one of Thief‘s best features, because the sense of immersion you feel while you are tensely picking a lock or nabbing some loot while not knowing for certain if anyone sees you is a huge rush. Unfortunately, the further away you get from the game’s core mechanics the more things start to go wrong.

Thief follows a man named Garrett, who is a Master Thief who comes out at night and steals from the most wealthy people he can find to score some huge payouts. He has been doing this for many years and he almost always works alone, resulting in him being a mystery to pretty much everyone. However, there is a girl named Erin that was an apprentice of his that ends up coming back into his life when they both accept the same job from their contact Basso. Things go very wrong when they notice some kind of ritual going on and Erin falls through the ceiling window and lands right in the middle of it. She is enveloped in the ritual’s energy, she screams and then a huge explosion occurs.

This is where Thief‘s main plot comes in. While the first few missions contain the character sneaking into buildings and finding precious loot for whomever the contact may be, a supernatural element is quickly introduced to the story that drives its middle and final chapters. What first seems like a Gothic world facing a disease known as The Gloom in a Victorian era soon dissolves into something much more sinister and fantastical. The deeper you snoop around, the more things you find that very few normal people know about in Thief‘s world.

The gameplay of Thief, at its core, is fantastic. Waiting for the opportune moment to walk past an unsuspecting guard or using the environment to navigate unseen is deeply engaging. The first-person mode heightens the tension a lot, as it makes it feel more like you are the person committing the thievery. As you lurk around the shadows you will find loot out in the open, in drawers, in safes and behind hidden passages, and it is up to you to search every nook and cranny in every area. You can make your life easier by using a slew of items to make sneaking around easier, such as water arrows to put out torches, blunt arrows to trigger light switches, and bottles that can be thrown to distract guards away from your area. You have almost complete control of your environment, and that feeling of truly being a Master Thief is where the game shines the most.

If you are seen, however, you have two options: run for your life or stay and take on however many guards know of your whereabouts. If it’s only one or two guards, you can take them out with Garrett’s club and get on with your life, but most of the time you will find several guards on your tail and your best option is to just run as fast as you can. Even though the hand-to-hand combat is not the main focus of the game, it does feel pretty weak. The game gives you the option to go unnoticed or to take out all of your adversaries, but taking on an enemy one-on-one just results in the player mashing the melee button as the guard either swings his weapon or defends. The knock-out animation that happens once you have brought your foe to his knees is also kind of glitchy, and unfortunately takes the game out of the first-person view briefly.

The glitches and other bugs are much more severe in more prominent areas of the game, however, which makes me wonder how much quality control time was spent on this game. As you walk through areas you will hear lines of dialogue that are either too low or too high in relation to your proximity of the characters, and sometimes one character will be speaking more than one line of dialogue at once. Other times you will be hearing conversations going on that sound like they are right next to you, but there is actually no one around you no matter where you look for them. 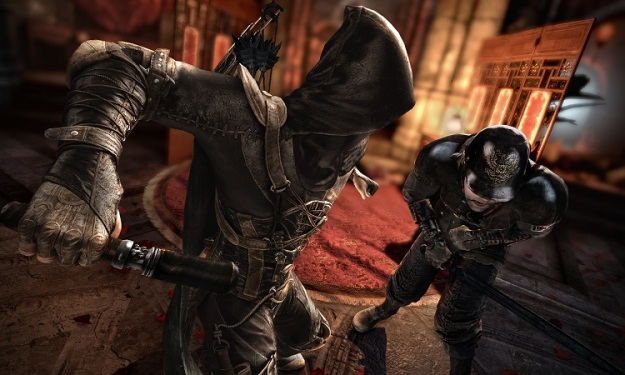 The game’s cutscenes also fall victim to glitches often. In many of the scenes there will be some odd visual errors that will appear on the characters’ faces, or their animation might get a little stilted for a second or two. The worst instance, however, came at about the half-way point of the game for me. A cutscene began and subtitles came up on the screen and the characters appeared as if they were talking, but no voices could be heard. It wasn’t until about 10 seconds later that the voices started, from *the beginning of the conversation*, of course, which resulted in the entire scene playing out of sync and becoming confusing as all hell. How does something that bad go unnoticed?

The story is also a bit of a letdown. Even though it has a nice build-up and introduces some creepy supernatural elements, the ending of the game left much to be desired. The game is much more engaging when it just involves you exploring an unknown area and discovering all of its mysteries, as the story is more of a vessel to bring you to these new areas that introduce more tense stealth gameplay. It also doesn’t help that Garrett is the quiet type, resulting in him being a pretty dull and lifeless character that I never really got invested in.

Thief has a free-roam feel, as you have an entire city at your disposal that contains hidden loot not related to the game and a slew of side quests that will net you even more loot. The city is connected by several gateways that result in a loading screen between each small area, and even though that has been a bummer to some I never found the loading times to be too bad. It would have been nice to have the whole city feel like one big level rather then a bunch of smaller and connected levels, but it still functions well as is. There are always things to do that are off the beaten path, which results in the world of Thief feeling truly alive. 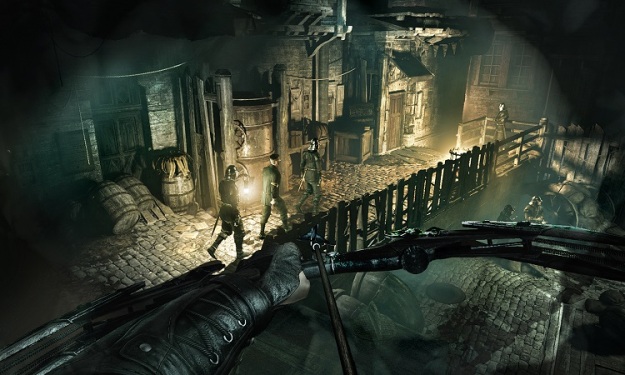 Thief also has a challenge mode, which puts you into some of the game’s levels with specific goals to accomplish. Chain & Gain has you running around a level looking for loot, which adds time to the time counter. The object is to find as much loot as you can as fast as you can to stop the clock from reaching zero. The other original mode (other than a timed Chain & Gain that involves you getting as much loot as you can in a set amount of time) is called Special Loot Hunt. In this gametype you are given a certain item to sniff out in a particular level, and you sniff it out by using your screen marker. In both modes you will have to deal with guards and regular civilians that stand in the way of you and your loot, which is always a lot of fun. I would have liked more depth in the challenge mode, as their are essentially two game types and only a couple of levels to play them on.

In a nutshell, Thief has a solid foundation that is letdown by mid to surface level things. The gameplay is an absolute blast, but it is letdown by audio and visual glitches that sometimes muddle the atmosphere. The main storyline is also brief, running me about 7-8 hours in total. I wish the story wrapped up a little better and was presented in a more comprehensible way, but regardless of its inconsistencies it did keep me interested in the outcome. This is a game that definitely could have used a lot more polish, as the longer I played the game the more I realized that this is a mechanically sound machine that is unfortunately covered in some mud.