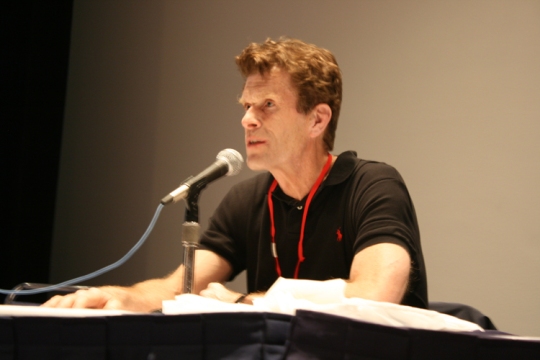 Fear not, Arkham lovers, as the man who has voiced Batman for many years now will indeed be reprising his role in the upcoming prequel, Batman: Arkham Origins.

As early as last month fans were fearing that he would not be returning, as Warner Bros. Games Montreal mentioned wanting to cast a new voice actor to fit with the younger Bruce Wayne. It was turning into a Metal Gear Solid V: The Phantom Pain fiasco all over again!

However, the Batman himself Kevin Conroy has put all worries to rest, as he announced at the Dallas Comic Con that he will be back to voice Batman/Bruce Wayne.

I’m absolutely thrilled to hear this news. It was hard enough for me to move on from the fact that David Hayter was being replaced for the new Metal Gear Solid, and I’m not sure I could stomach an another iconic voice actor being replaced in the same year. Kevin Conroy has been voicing many iterations of Batman since the early 90’s, and he voiced him in the previous two Arkham games, so he freakin’ had to come back.

There are some conflicting reports, however, saying that somebody else could be voicing a younger Batman while Conroy voices the other one. Who knows at this point, but as soon as the dust has settled and the answers become clear, I’ll have it ready for ya.

135 thoughts on “Kevin Conroy On Board For 'Batman: Arkham Origins'”