Hey everyone! Today I’m gonna be starting another series where I review albums from a band that has something releasing soon. Luckily for me, this band only has one album so far, so I don’t have much catching up to do. I guess that really isn’t much of a series either… oh well! Even though it’s only one album I’m definitely glad I checked it out. Why you ask? Read on, dear reader, read on.

Unknown Mortal Orchestra is influenced by several genres, but most of them are ones coming right out of the 60’s. Their sound has some hazy psychedelia that drifts along with a noticeable level of distortion, but it’s amazing how much rhythm is present at the same time. The song “How Can U Luv Me?”  has very psychedelic guitar tones fluttering through the track, but it’s all brought down to earth with an extremely catchy vocal hook and an insanely bouncy rhythm section. The lead vocalist sings in a hurt but also oddly upbeat way that gives the track a lot of emotional soul even though it’s something you can dance to. You’ll be dancing why you’re crying, basically. Just kidding.

The fact that the bands debut album is able to employ many psychedelic qualities without making it all seem like a kaleidoscope of different sounds is a testament to how sound their instrumentation is. At the core of most every one of these songs is a head-bobbing rock song, and the psychedelic flourishes are more like jimmies on top of it all. The rhythm section is actually in the foreground in a lot of these songs, which is definitively refreshing to hear with this type of music.

What’s most interesting about this album is how much I was able to connect with it, even though the lyrics are hardly ever the main focus. You may understand the lyrics and you may sing along, but it’s more like just singing along with the melodies without really knowing (or caring) what the lyrics are saying – and I think that’s what the band sought to accomplish here. Most of the time the lyrics are purposefully hazy and mixed right into the instrumentation, because the music here is very much a collage of sounds rather than any one facet taking the lead. The album opener “Ffunny Ffrends” is a perfect example of a vocally distorted song that you can’t help but sing along to. This isn’t a knock on the songwriting, and honestly when the music is this catchy it isn’t even a point worth arguing anyway. 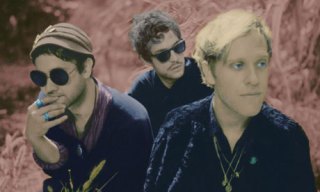 UMO’s debut album is a quick and fun psychedelic-tinged, rhythm heavy rock album that anyone with an interest in this type of music can get into. The band knows what they’re doing when it comes to laying down a very solid foundation of bass and drums that drive most of these songs forward, and then they sort of flesh them out with some psychedelic experimentation. Some of the songs can get a bit repetitive or just not do enough that really sticks out in your mind, but overall these guys get it right. In just 30 minutes UMO creates a foot-stomping, head-bobbing bash that begs you to come on in and join in the fun.