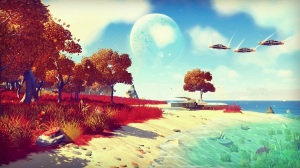 Hello Games’ No Man’s Sky has been receiving quite a bit of hype ever since it was announced due to its unique gameplay and visuals. In the game you have the ability to explore the near-infinite bounds of space, with each planet being unique from the last.

Every game has to have a limit, right? Well, sort of. In an interview with IGN, Hello Studios’ co-founder Sean Murray said that it would take approximately 5 billion years to see everything in the game.

No Man’s Sky is being developed for the PlayStation 4 and PC and is set to be released sometime next year.